Located on the northern outskirts of Bangkok past the city’s domestic airport, the poorly named National Memorial is a museum dedicated to the highlights of Thai military history. Like just about every other military museum in the country it’s obscure and requires visitors to make an appointment beforehand; as a reward for braving red tape there are no entry fees. The only day you can walk in without having to explain yourself at the entrance’s guard post is Children’s Day, which really isn’t the best of days for those harbouring an aversion to kids.

Dotted around the buildings are tanks and field guns, as well as the odd helicopter, patrol boat and airplane. Unfortunately kids were swarming all over the place and climbing onto every turret and gun barrel that I didn’t bother to photograph the LVT and Ha-Go.

Most visitors will start their tour at the Military History Hall, which features life-size mannequins. The first display is dedicated to the Siamese Expeditionary Force that failed to see action on the Western Front but was famously photographed marching down the Champs Elysée as part of the 1918 victory celebrations. Because the Memorial is run by the Armed Forces’ education department I was gobsmacked by the inaccuracy of the uniforms.

For reasons yet to be discerned the museum curators have opted to ignore all photographic and regulatory references in favour of mustard khaki uniforms and dodgy-looking leather boots and webbing equipment.

The next hall features the Franco-Thai War. Naturally the conflict is portrayed as a worthy national struggle, akin to the region’s postwar struggles for independence and self-determination. In addition to the displays pictured there is also a miniature diorama of an irredentist rally being held in front of the Grand Palace. 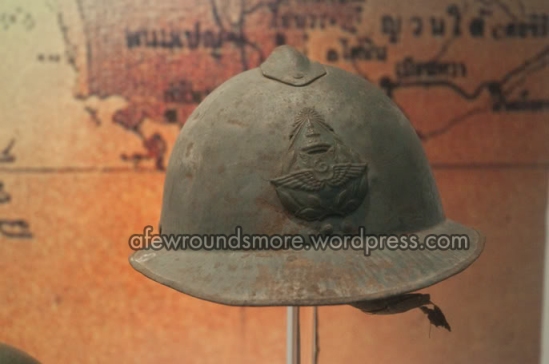 An air force helmet, as worn by ground defence troops.

Continuing on is a room dedicated to the spectacularly disastrous Battle of Koh Chang. Pictured above is a mediocre display of the doomed HTMS Thonburi’s bridge, complete with the dead and dying.

Past this is the WWII hall. The Japanese invasion of 1941 is heavily emphasised while Thailand’s prolonged campaign in the eastern Shan States is downplayed and, to my horror, distorted (the museum’s explanation is that the Japanese forcibly requested us to participate, which is contrary to what had occurred in reality). 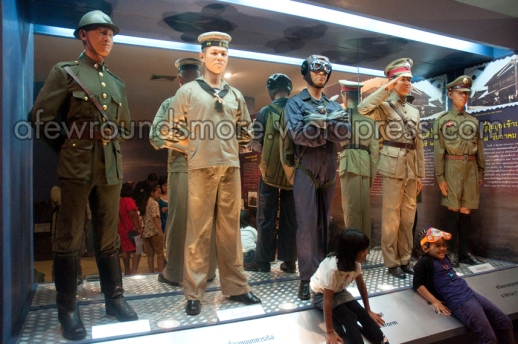 First up are the uniforms of the good folks who resisted the Japanese on December 8. From left to right: the army, navy, air force, police, and Yuwachon (Thailand’s answer to the Hitler Youth). 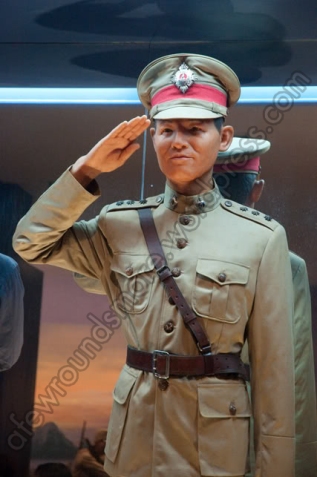 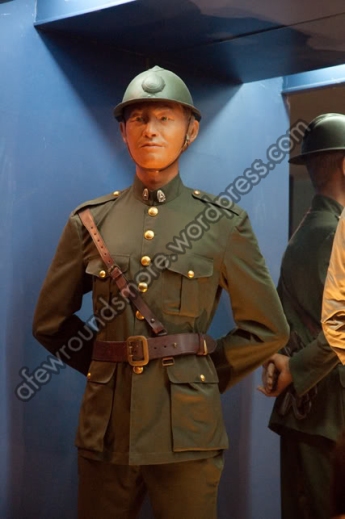 Opposite this group is one of the museum’s better displays, which depicts pilots, sentries and mechanics engaging the invaders in hand-to-hand combat during the siege of the airfield at Prachuap Khirikhan, the air force’s Rorke’s Drift.

From there we progress onto the Korean War: “Some UN members sought political kudos, dispatching bloated headquarters organisations to supervise and command relatively small fighting elements. These had to be diplomatically side-tracked into logistic areas or repatriated as irrelevant. Thailand originally announced that it would send a full regimental combat team… and a huge headquarters staff on top of it. This duly arrived even though the Thai military contribution was in the end no more than a battalion. Three hundred strong, the Thai headquarters boasted judge advocates, medical staff officers (but no field hospital), a director of finance, adjutant-generals’ and quartermasters’ sections and even a Red Cross and welfare staff. All this was under the command of a prince bearing the rank of major-general. It was totally superfluous and sent to the rear to train reinforcements, which it did for a while before returning home.”

The final room is all about the Queen’s Cobras in Nam, with exhibits displaying captured commie weapons in addition to the regimental colours.

On the second floor in the adjacent hall are crude miniature dioramas depicting battles from the medieval period onwards. Again little attention is given to accuracy, as can be seen from the uniformed appearance of the figures.

Two are dedicated to commendable actions of the Franco-Thai War: the defeat of the Foreign Legion at Phum Preav in Cambodia and the gendarme’s hoisting of the flag(!) at Hongsa in Laos. 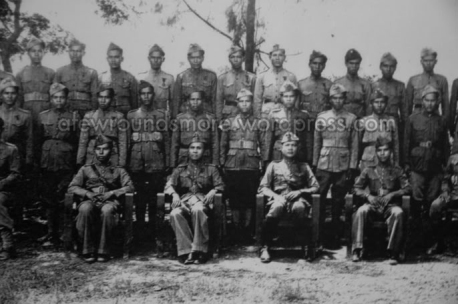 The defenders of Phum Preav.

A bit more impressive are these two paintings:

The rooms on the top floor are dedicated to uniforms. The following two are meant to represent warriors of the Sukhothai Kingdom in the 13th and 14th Centuries.

The next two are for the Ayutthaya Kingdom that succeeded the above.

Ayutthaya was razed by the Burmese in 1767 and for a short while Siam found itself occupied. Phraya Tak, an accomplished general who managed to leave the capital before it surrendered subsequently liberated the country and had himself crowned as the first sovereign of the Thonburi Kingdom.

King Taksin was executed in the aftermath of coup. The Thonburi Kingdom then gave way to the Rattanakosin (or Bangkok) one. Pictured below are uniforms of the 1870s to the 1890s.

Outside in a corner far removed from the entrance is a small garden dedicated to the Phayap Army, the force that invaded the Shan States in 1942. 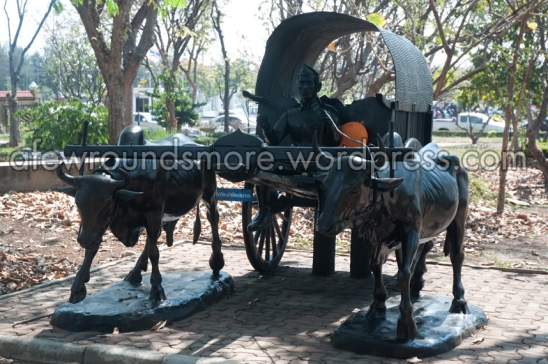 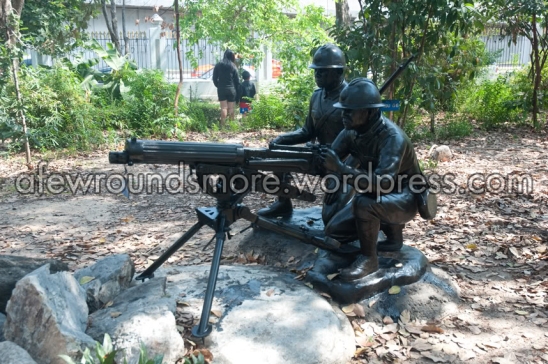 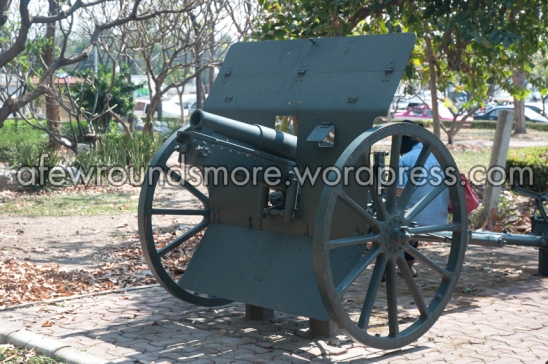 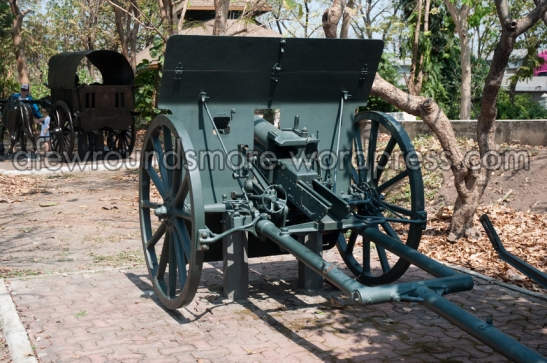 So is the museum worth visiting? Unless you’re fascinated by the Thai military’s view of itself, there really isn’t much to see; moreover, its location and lack of attention to accuracy makes it really hard to recommend – wargamers and military history buffs are better off visiting the army and air force museums.

From Hualampong, MBK, the Victory Monument and the Moh Chit skytrain station take bus no.29. Alternatively you can take the air-conditioned bus no.522 from the Victory Monument. The building itself is a bizarre architectural nightmare, and as such you should have no difficulty noticing it.

For pictures and information see here and here.